Rev Fr Walsh of St Gregory’s Longton bought the property known as “Highfields” in 1934. Rev Fr O’Connor, who was a curate at Longton, became the first parish priest and the first Mass celebrated was Midnight Mass in the stable on 25th December 1934.

The school was built in 1937 and the school hall was used as the church until 1949. During the 1939-45 war the school hall was also used as an entertainment centre. Dancing, whist drives, bingo and concerts were organised for the parish and as a source of revenue for the parish. From 1937 until 1949 the school was in full use seven days a week. As a school in the daytime and to host various events in the evening until 11.30 p.m. Then everything had to be cleaned up in preparation for either school or Sunday Mass. There was no evening Mass at that time so this work had to be done by the parishioners and a very hard working parish priest. In 1949, the then new parish priest Rev Fr McKenna added a Nissan hut to the stable buildings to enlarge the capacity for the congregation. After 1949 the school hall continued to be used for any entertainment event and was always known as “Gussies”.

Construction of the present church building commenced in May 1957 when the foundation stone was laid. The main building was completed in September 1958 and the sacristy/chapel was added later in 1959. Every effort was made to reduce the debt on the church and eventually the church was consecrated in 1971. The parish had five priests in the first twelve years. Rev Canon McKenna served as parish priest from 1946 until 1966 when Rev Fr Oddie succeeded him. Rev Fr Oddie was parish priest for a period of twenty-eight years until he retired due to ill health in 1994. Our parish priest was Rev Fr Anwyl from November 1994 until August 1998. Rev Fr Foley was appointed to the parish later the same year. Rev Fr Jan Nowotnik was appointed in 2003. The present parish priest is Rev Fr David Hartley, who was inducted in 2010.

There have been several memorable events since the inception of the parish. The Dennison family provided two priests, Rev Fr Thomas and Rev Fr Peter Dennison. Fr Thomas was ordained at Oscott in 1957 and Fr Peter in 1959. Both priests celebrated their first Mass at St Augustine’s. The parish had three Ministers of the Eucharist appointed at St Chad’s Cathedral, Birmingham on 30th June 1979. The parish was actively involved in the visit of Pope John Paul at Coventry airfield on 30th May 1982. Rev Fr Goodwin was ordained priest at St Augustine’s on 9th June 1984 and on 25 th November the same year, on the Feast of Christ the King, witnessed the Ceremony of Perpetual Profession to the Franciscan Missionaries of St Joseph by Sister Felicity Torjusson. In 1987 the school celebrated fifty years of Catholic education and of direct communication between the school children, parents, teachers and congregation. This was all the more remarkable given the “fight” during the 70’s to prevent the closure of the school. This was largely due to the campaign by Fr Oddie of “not what you know but who you know”. During the 1960’s three parishioners received the Bene Merenti Medal and in 1997 the parish again celebrated the award of the Bene Merenti Medal to two parishioners. On 21st June 1998 Trevor Borthwick was ordained as a Permanent Deacon at St Chad’s Cathedral and on 20th June the following year Peter Phelan was also ordained Permanent Deacon at St Chad’s. 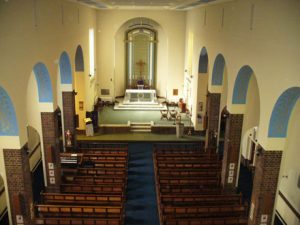 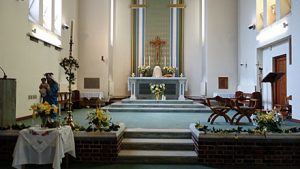 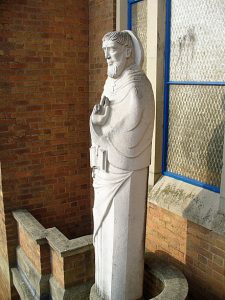