In 1811 a community of Benedictine sisters, originally from Ghent in Belgium, settled in Caverswall Castle from Preston. They first created a chapel in the castle itself, but in 1812 the first Catholic chapel in Caverswall since the Reformation was built. It was opened by Bishop Milner on 26th Jan 1813.

The community hosted many great leaders of the Catholic community at the time, including Bishop Milner and Blessed Dominic Barberi. They founded a girls school that drew pupils from all over the Midlands, and eventually moved to Oulton. Catholics from Meir and Lane End (Longton) had attended mass at the convent until a separate chapel in the town was built for them in 1820.

In 1864 the present church of St Filumena was opened for the people of the area of the present parish covering Caverswall and Weston Coyney and most of Blythe Bridge.

“A fancy fair and gala were held in the grounds of Caverswall Castle, the residence of J.P. Radcliffe Esq on Monday last, the proceeds of which will be devoted to the funds of a new Catholic church which it is contemplated to erect at Caverswall. The bazaar, which was held in what was formerly the moat of the castle was furnished with a large and beautiful assortment of the articles generally contributed on such occasions and was very extensively patronised by an influential party of visitors, numbering from 900 to 1000.”

(Article from the Staffordshire Advertiser Newspaper, published on 20th September 1862). 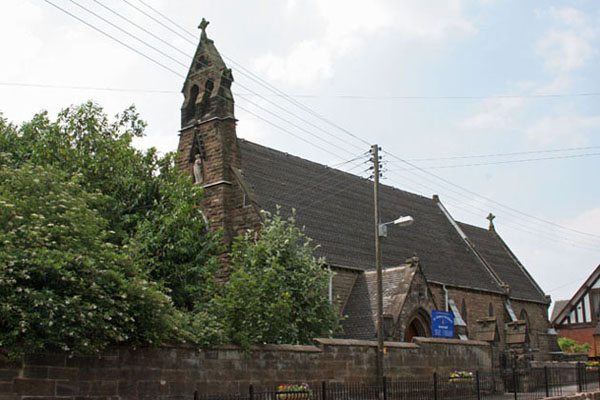 “On Thursday last a new Roman Catholic Church, erected in the village of Caverswall, was opened by the Titular Bishop of Birmingham, Dr Ullathorne. The principal portion of the cost of the new building (£1,700) has been generously defrayed by J.P.P. Radcliffe Esq of Caverswall Castle. The edifice stands on a piece of ground contiguous to the ancient castle and within a hundred yards of the Protestant church. It is dedicated to St Filumena and its style is of the first period of Pointed architecture. The church has been built from the designs of Mr Gilbert R Blount of London, by Mr Lewis Jeffries of Stone, and the carving has been executed by Mr Williams Farmer of London.

“The walls and dressings of the exterior are of stone obtained from the neighbourhood. On the western gable there is a belfry containing two bells under which there is a niche containing a figure of St Filumena. The interior consists of nave, chancel, sacristy and porch, the chancel arch resting on dwarf marble columns, having corbels, with carved foliage intermingled with scriptural representations. The chancel roof is panelled. The nave has an open-timbered roof resting on corbels with carved angels. Adjoining the chancel there is also a vestry.”

(Article from the Staffordshire Advertiser Newspaper, published on 30th January 1864). 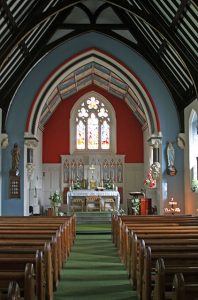 From the big diocesan history book we find:

“This sturdy neo-Gothic church was built in 1863 by Sir Perceval Ratcliffe, whose family took over Caverswall Castle three years before. Local Catholics had previously heard mass there when the Benedictine nuns occupied the castle.  After they moved to Oulton in 1853 priests from St Gregory’s Longton served them (the chapel of the sisters having been demolished when they moved out). The present church was opened by Bishop Ullathorne in January 1864.  It has a nicely decorated chancel and some lovely glass.” 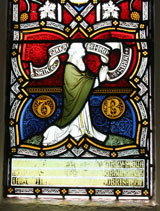 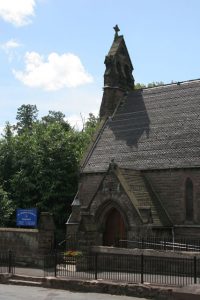 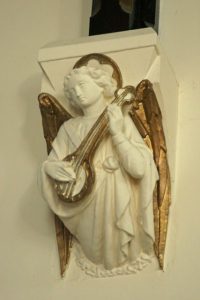